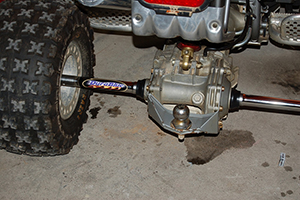 One of the worst things to have happen on the trail or in the race is to smack a rock, tree or stump with the rear tire and bend an axle. This can ruin your day, your weekend or your race depending on the circumstances. Fortunately there is a company who manufactures ATV parts but most notably ATV axles. In fact they manufacture a World Record holding axle.
DuraBlue manufactures an entire collection of replacement parts for ATV’s. After browsing the few hundreds of parts listed on their website, I could see they manufacture parts that were designed for the most extreme conditions, or for a better choice of words to be “tortured”.

When we began our KFX-700 project we knew it was going to be intended for GP, desert and hare scramble racing. This inspired us to create a machine that was able to withstand some of the harshest environments. With the OEM axle being notorious for not being able to withstand the abuse, we knew we couldn’t take any chances. We needed the best setup, so without hesitation we contacted DuraBlue for a new axle for our KFX-700.

Among the other aftermarket replacement parts DuraBlue offers, they have 3 axle styles, all of which are touted as better than OEM. They have a Heavy Duty axle which is intended for recreational use and is noted as being twice as strong as the OEM axles. They do not recommend the Heavy Duty style axle for any riding that will incorporate large jumps. The Heavy Duty axle is zinc finished and has a 6 month warranty against bending or breaking.
Next is the Eliminator axle which is the most popular replacement axle featuring a proprietary heat treating process that gives the axle exceptional wear and strength characteristics. You can purchase the Eliminator axle in standard or extended lengths. This size gives the rider the flexibility of choosing the axle to best suit their riding style. The Eliminator axle is warranted against shaft bending or breaking for as long as you own the axle. To finish the looks, the Eliminator axle is polished and then chrome plated.

Finally, is the X-33 axle which uses the same patented heat treating process as the Eliminator axle. But, DuraBlue goes a step further by uniquely changing the hub design area. Rather than using a traditional splined wheel hub, forcing the axle to be tapered, loosing it’s strength and rigidity, the X-33 axle meets the hub area with the shaft at full 1 3/8 diameter. The billet hubs, which are included, are then attached and clamped solid to the X-33 axle with a ½” pin holding it solid and reducing the necessity to have to re-check and tighten loose hubs like on standard axles. Like the Eliminator, the X-33 axle is polished and then chrome plated.

When Terry Wilmeth broke the Guinness World record for being the fastest ATV on the planet at over 160 mph, he used a DuraBlue X-33 axle. Terry was originally declared the Guinness World Record holder for the fastest ATV on the planet with the help of DuraBlue‘s Eliminator axle in July 2005 in Madris, Oregon at the Freeliner Test Track. The top speed reached was 138 mph, quite an adrenaline rush as you can imagine and that’s exactly what Terry himself described. He gained this incredible speed by using a homemade hybrid rocket thruster on his Raptor 660.

“One of the most critical factors facing anyone in a traditional land speeder is the fact you have to make certain driveline parts spin at speeds they were never designed nor intended to achieve. We knew we had to have rotating components that could hold up to incredible stress, heat and distortion. In the 2005 world speed record attempt with Rocket Raptor (RR) 3.0, we utilized a DuraBlue axle and successfully took RR 3.0 to 138 m.p.h. for a new Guinness and NWOTA world speed record. Well, we weren’t about to mess with success for 2007. To that end, we relied again on the good people at DuraBlue. They went way out of their way to provide an axle assembly, hubs, carrier and hardware that had been carefully tested, balanced, trued and retested to make sure they would stand the test of speed. Their expertise and technical support was invaluable. On the day of the world record attempt, we put the coals to RR 5.0 and I pushed the ATV to an awesome 164 m.p.h and then held it for the entire ¼ mile time trap measurement for a new ATV ultimate land speed record!! My daughter Natalie “Rocket Girl” Wilmeth then achieved a new women’s ultimate ATV land speed record of 135 mph. Considering the challenges we experienced in our various runs, it was very gratifying to see that the DuraBlue components were literally bullet-proof. We would never consider using any other rolling components in future efforts.
DuraBlue, you guys rock! We are forever grateful for helping us be the fastest ATV on the entire planet again!!! ”
Terry “Afterburner” Wilmeth “

With all the choices in mind we had to weigh benefits and since we wanted to use this machine in the most extreme conditions we felt we needed the best of the best in axle. Even though we weren’t going to be trying to break Terry Wilmeth’s record, we needed the best and that was the DuraBlue X-33.

The X-33 arrived from DuraBlue very quick, and was packaged in the basic point of sale cardboard packaging suitable for display on any dealer showroom or retail area. Opening the box revealed the axle, mounting hardware, two hubs and the universal installation instructions. Everything was packaged extremely well to ensure no damage during shipping. The chrome plating on the X-33 axle was flawless. This part made it very difficult to decide whether I wanted to install it on our KFX or not. The Chrome plated beauty looked more suitable on a wall or affixed to a full dresser Harley Davidson.

The billet hubs were very well made and gave the impression of being very durable. I couldn’t note any changes that could be made in this area to improve upon the hubs.

The X-33 is very heavy. But we did notice that after comparing it to the OEM is was just slightly heavier at 4 ounces over the OEM. We decided that we could live with 4 ounces if it meant having the best axle.

We read through the installation instructions and became completely confused since the pictures did not match anything the axle came with. Since the KFX-700 is a shaft ATV, installation was slightly different that a chain driven ATV. So, rather than fumbling around with confusion, we decided to tackle the project head on and see where it took us. After all, we knew we could contact DuraBlue if we ran up against a wall in confusion.

I was recovering from a severe back injury so I enlisted a friend to help with the installation. I left our shop to gather my camera gear in order to take some pictures and document the installation process. 20 minutes later I returned to find my buddy just finished tightening the hub pin bolts. The installation time took less than 30 minutes tops. That was it! After a final check over to make sure everything was torqued to manufacturers’ specs, it was time to bolt the wheels on and go ride. I can’t say that this is an easy install for every quad, but for us and the KFX-700 it couldn’t have been any more simple.

The X-33 is said to be the world’s best ATV axle. However, DuraBlue also makes 2 other great axles that may suit your needs too. We had a great customer service experience when contacting DuraBlue and we won’t hesitate the next time we need a product that is built to be the best.