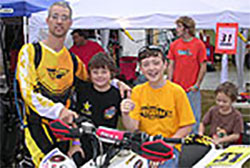 The HD documentary on Terry Wilmeth, ATV land speed world record holder is now finished! Watch him attempt to break 200 mph on his rocket propelled, nitrous fueled, turbo powered ATV. The fifty-three minute documentary covers his past attempts and the trials and challenges of setting his new record.

You can view the documentary either by streaming WMV files from our sever, or on our YouTube site. Here are the links: